Terracotta, terra cotta, or terra-cotta (Italian: [ˌtɛrraˈkɔtta]; lit. ’baked earth’; from Latin terra cocta ‘cooked earth’), in its material sense as an earthenware substrate, is a clay-based unglazed or glazed ceramic where the fired body is porous.

In applied art, craft, construction, and architecture, terracotta is the term normally used for sculpture made in earthenware and also for various practical uses, including vessels (notably flower pots), water and waste water pipes, roofing tiles, bricks, and surface embellishment in building construction. The term is also used to refer to the natural brownish orange color of most terracotta.

Terracotta is a very flexible material to sculpt. Pieces can be formed by both an “additive” technique, adding portions of clay to the growing pieces, or a “subtractive” one, carving into a solid lump with a knife or similar tool. Perhaps most common is a combination of these, building up the broad shape and then removing pieces, or adding more, to produce details.

The most common method of production is to take an appropriate refined clay, then form it to the desired shape. Alternatively it may be made with one or more moulds. After drying, it is placed in a kiln or atop combustible material in a pit, and then fired. The typical firing temperature is around 1,000 °C (1,830 °F), though it may be as low as 600 °C (1,112 °F) in historic and archaeological examples. The iron content, reacting with oxygen during firing, gives the fired body a reddish color, though the overall color varies widely across shades of yellow, orange, buff, red, “terracotta”, pink, grey or brown.

A final method is to carve fired bricks or other terracotta shapes. This is less common, but features for example in the Architecture of Bengal on Hindu temples and mosques. 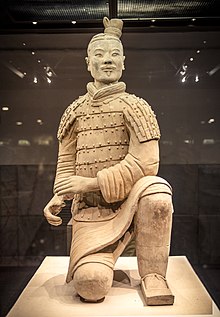 One of the warriors of the Terracotta Army, mould-made Ancient Chinese terracotta sculptures of the armies of Qin Shi Huang, the first Emperor of China

Fired terracotta is not watertight, but surface-burnishing the body before firing can decrease its porousness and a layer of glaze can make it watertight. It is suitable for use below ground to carry pressurized water (an archaic use), for garden pots and irrigation or building decoration in many environments, and for oil containers, oil lamps, or ovens. Most other uses, such as for tableware, sanitary piping, or building decoration in freezing environments, require the material to be glazed. Terracotta, if uncracked, will ring if lightly struck.

Painted (polychrome) terracotta is typically first covered with a thin coat of gesso, then painted. It has been very widely used but the paint is only suitable for indoor positions and is much less durable than fired colors in or under a ceramic glaze. Terracotta sculpture was very rarely left in its “raw” fired state in the West until the 18th century.

Terracotta tiles have a long history in many parts of the world. Many ancient and traditional roofing styles included more elaborate sculptural elements than the plain roof tiles, such as Chinese Imperial roof decoration and the antefix of western classical architecture. In India West Bengal made a speciality of terracotta temples, with the sculpted decoration from the same material as the main brick construction.

In the 19th century the possibilities of terracotta decoration of buildings were again appreciated by architects, often using thicker pieces of terracotta, and surfaces that are not flat. The American architect Louis Sullivan is well known for his elaborate glazed terracotta ornamentation, designs that would have been impossible to execute in any other medium. Terracotta and tile were used extensively in the town buildings of Victorian Birmingham, England. Terra cotta was marketed as a miracle material, largely impervious to the elements. Terra cotta, however, can indeed be damaged by water penetration or exposure or fail through faulty design or installation. An excessive faith in the durability of the material led to shortcuts in design and execution, which coupled with a belief that the material did not require maintenance tainted the reputation of the material. By about 1930 the widespread use of concrete and Modernist architecture largely ended the use of terracotta in architecture.

Along with serving decorative purposes, terracotta tile is also a flooring construct. In fact, terracotta floors are found worldwide with some being several hundred years old. The quality of terracotta tiles are directly impacted by factors including the source of the clay, the manufacturing methods (kiln-fired being more durable than sun baked), and whether the terracotta tiles are sealed or not.

Architectural terracotta refers to a fired mixture of clay and water that can be used in a non-structural, semi-structural, or structural capacity on the exterior or interior of a building.

Some architectural terracotta is actually the stronger stoneware. It can be unglazed, painted, slip glazed, or glazed. A piece of terracotta is composed of a hollow clay web enclosing a void space or cell. The cell can be installed in compression with mortar or hung with metal anchors. All cells are partially backfilled with mortar.